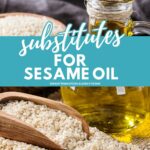 Sesame oil is a common cooking ingredient in many recipes. There are many reasons you may want to find a substitute for sesame oil, such as an allergy or running out of it. This guide will talk about the different substitutes for sesame oil and how they can be used in cooking.  If you are wondering what you can use instead of sesame oil, don’t worry we have you covered.

Let’s take a closer look at what sesame oil is uses for, so we can understand how to find the best replacement for sesame oil to suit your needs.

Sesame oil is often used in many types of Asian cuisine due to its strong flavor and use as a thickening agent when frying vegetables or meat.  It does have a very distinctive flavor.

While that flavor is hard to duplicate, the impact of sesame oil in a recipe can be substituted by any number of oils.

Looking for a great sesame oil substitute?  Try one of theses.

Canola oil is one of the most popular oils for cooking. You can substitute it with sesame oil by using half the amount and adding a little bit more heat to your recipe, such as from spices or other ingredients, since sesame oil does have a distinctive flavor.

Can you substitute olive oil for sesame oil?

Yes, you can substitute olive oil for sesame oil.  Olive oil has a high smoke point which makes it good for frying foods like eggs or in recipes that require higher temperatures.  Yes, you can fry in olive oil! It also pairs well with certain flavors in dishes and salads, since it does have a distinctive flavor.

Grapeseed oil can be used as a substitute for sesame oil in many recipes. You may substitute it at the same rate of measurement as you would with sesame seed oil, and cook it at the same temperature to have your dish turn out similar to what you were expecting! It has a light flavor and aroma that blends well.

Can I use avocado oil instead of sesame oil?

Yes!  Avocado oil is great substitute for sesame oil. It has a mild, nutty flavor that’s perfect in any dish you would normally use sesame seed oil! Simply substitute it at the same rate of measurement as you would with grapeseed or avocado oils and cook over medium heat to get similar results. Avocado also has many health benefits as well, and has become increasingly popular.

Still have some questions about swapping out sesame oil?  We have answers!

Can you substitute vegetable oil for sesame oil?

Vegetable oil is one replacement for sesame oil.  remember, vegetable oil is a catch all term that can be used to describe a blend of oil or any oil made from a vegetable source.  Always make sure to read the lane!

The vegetable oil can also be used for frying eggs or other food that needs to have a high heat.

Sesame oil and olive oil are not high in cholesterol, but they do have a higher fat content than many oils.

Which oil you choose instead of sesame oil will depend on a number of things, such as what you have on hand at the time, and if you have dietary restrictions.  It may also depend on what you like the taste of.