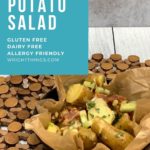 Potato salad is a classic food at almost every summer BBQ.  Personally, I’ve never liked mayonnaise, and as it turns out I’m also allergic to egg, so mayonnaise is a big no no for me.  Did you know it is possible to make potato salad without mayonnaise?  It sure is, and I’ll bet your family will like this version even more due to one very special ingredient. 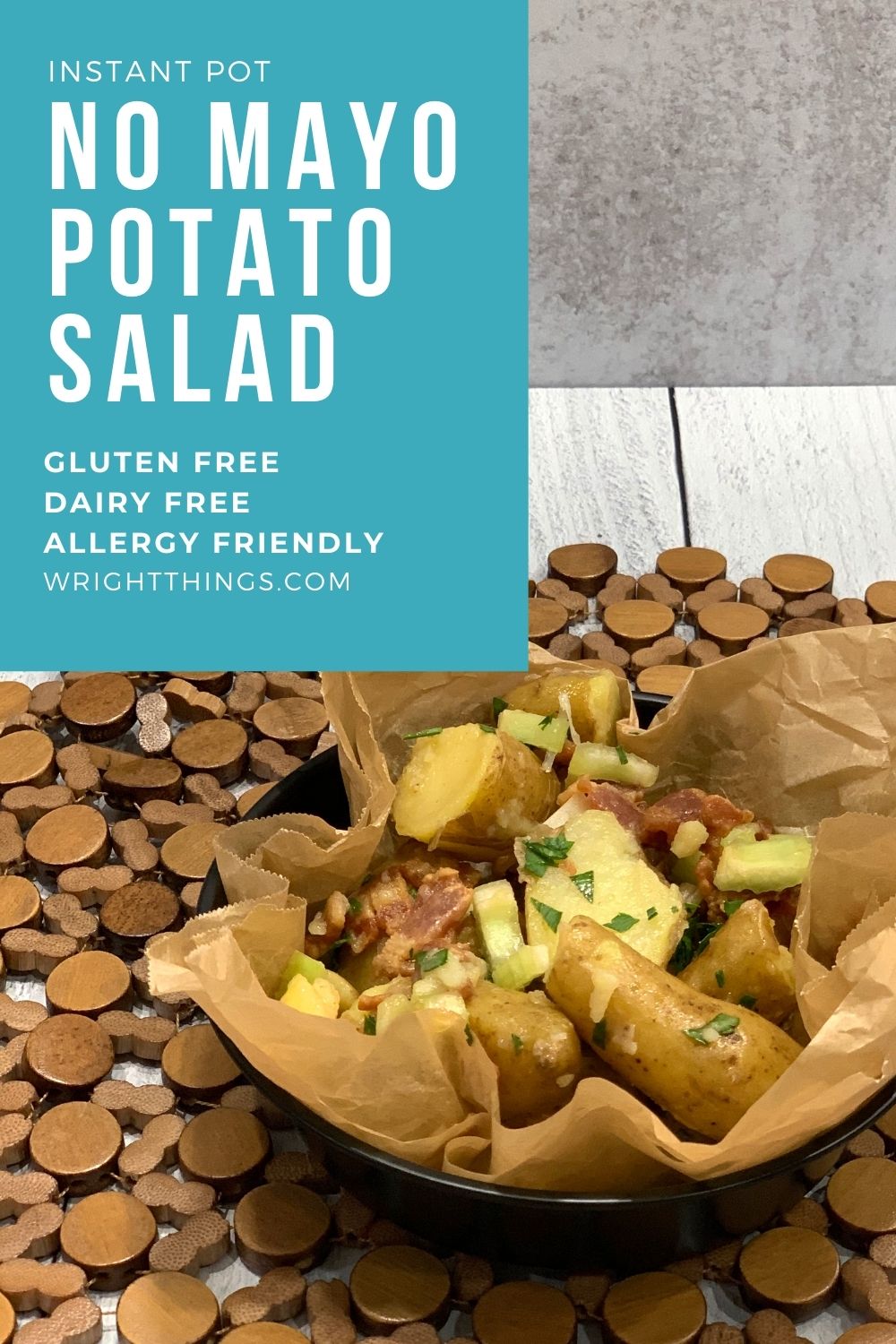 I wish I could take credit for inventing the idea of potato salad without mayonnaise, but as it turns out Germany beat met to it very many years ago.  German potato salad is best known for no mayo.

One of my good friend’s hallmark dishes is German potato salad, which if you have never had it before, has onion in it.

Since I’m allergic to onion too, I came up with my own adaptation using celery instead, and voila, a great side dish for any occasion. 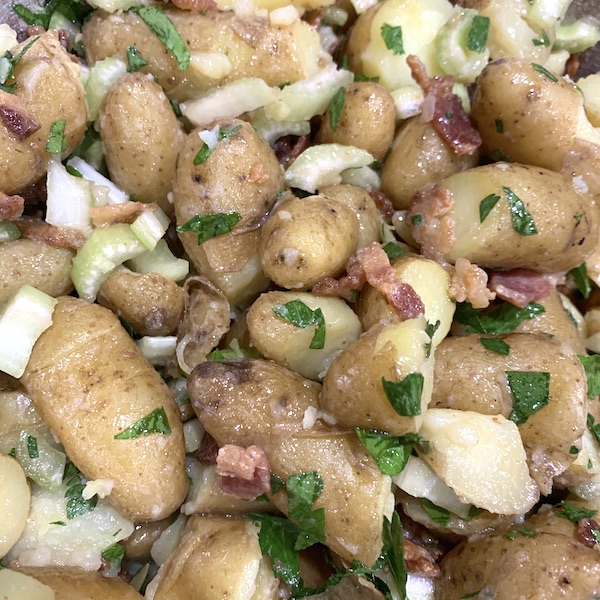 The celery gives the potato salad a nice crunch like it would have if it had raw onion in it.  This is simple chopped raw celery, which makes this recipe even easier to put together.

This Instant Pot German potato salad is of course, gluten free, and super easy to make thanks to the help we get from our Instant Pot!

No Instant Pot?  No problem.  You can still make this amazing gluten free German potato salad by simply boiling your potatoes until you can put a fork through them!

No Mayo Potato Salad with Bacon

Almost everyone loves German potato salad because of one very special ingredient: bacon!  Lots and lots of bacon!

Who doesn’t love bacon and potatoes together?  Pretty much the only thing better than hash browns and bacon in the morning is this potato salad in the afternoon or evening.

Besides potatoes and bacon, there are a couple of other key ingredients in this potato salad without mayo:

That’s it!  The red wine vinegar and bacon give this potato salad a naturally tangy flavor, and the celery gives it a nice crunch.  You won’t miss the onion in this recipe, which also makes this potato salad perfect for anyone that has to avoid onion due to an allergy, IBS, or sensitive stomach. 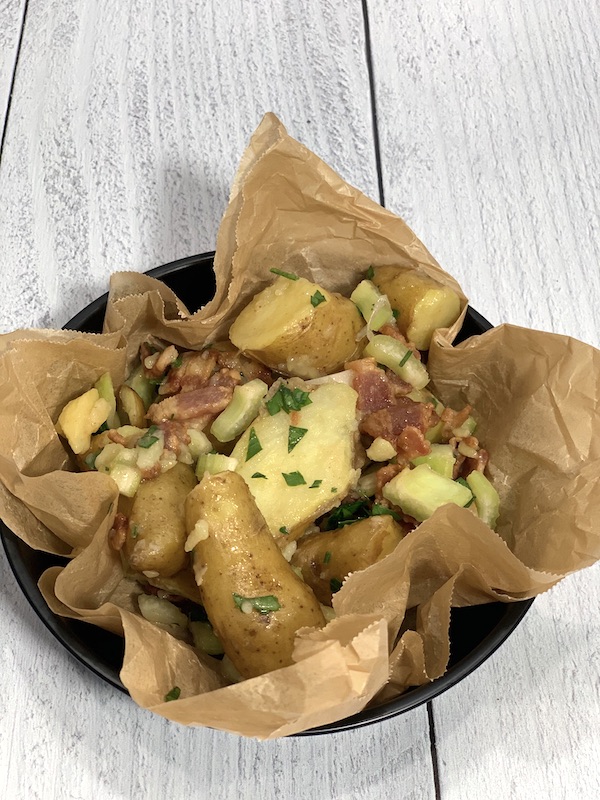 Did I mention this recipe is allergy friendly?  You won’t find any of the top 8 or top 11 food allergens hidden in this potato salad!

Making Potatoes for Potato Salad in the Instant Pot

I used my Instant Pot to make the potatoes for this potato salad.

I washed my potatoes, put them in the pot with 1/2 cup of water and cooked them on high pressure for 5 minutes. 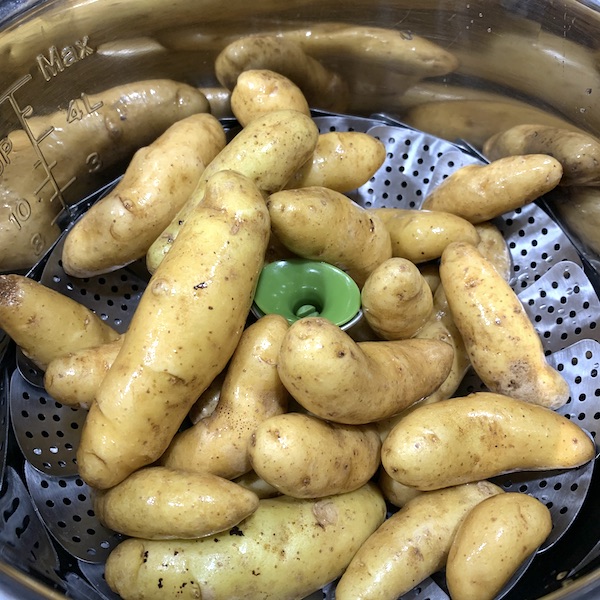 I like to use a regular old steaming rack when I make things like potatoes for potato salad in the Instant Pot.

Then I let the pressure naturally release for 5 minutes before releasing the rest of the pressure.

They were perfect!  Since I used fingerling potatoes, I didn’t even bother cutting them up before I cooked them.

If you don’t have an Instant Pot, don’t worry!  Just boil your potatoes until you can stick a fork through them.

This potato salad is great served warrm or chilled, it is up to you!

Feel free to use whatever potatoes you may have on hand, or substitute the red wine vinegar for apple cider vinegar or white vinegar.